We are looking at RV towing laws you might not be aware of!

Laws can change or be updated. Therefore, this blog is meant for informational purposes only. It is not to be used as legal guidance for towing travel trailers.

Have trailer, will travel! That’s the whole point, right? If you and your travel squad are ready to hit the open road in your towable camper, you may wonder if there are any special driving laws for vehicles pulling a trailer. Sure enough, many laws dictate the proper usage of all types of trailers.

However, things get confusing because these laws aren’t nationwide. Instead, each state has its own rules of the road. So, if you’re taking a cross-country trip, you will need to do a bit of research ahead of time to make sure you fully understand the laws in every state you’ll be cruising through.

Lane restriction laws are among the most common RV towing laws. Let’s take a look at what the general rules are for driving in the left lane on highways and which states have the strictest RV towing laws.

Why Do Lane Restriction Laws Exist?

There are two main reasons that lane restriction laws exist for pulling trailers: safety and traffic.

Have you ever been stuck behind a vehicle going too slow in the left lane? It’s not only frustrating because it slows us down, but it also creates a massive traffic jam.

These vehicles aren’t usually passing slowly because the driver isn’t paying attention. Typically, that’s as fast as the truck can pull the heavy load that they’re towing. Or it isn’t safe for them to drive any faster. One trailer slowly passing in the left lane can cause a considerable delay for hundreds of drivers behind them. According to studies, a car going below the speed limit is more likely to cause an accident than one driving above it.

Not only does this disturb the flow of traffic, but it can be downright dangerous. Drivers pulling a trailer might be tempted to try and avoid this by driving faster than is safe. Cars moving faster may end up slowing down, changing lanes, or pulling dangerous maneuvers to get past.

…on freeways and other high–speed roads, speed limit increases generally lead to higher speeds and crashes.

Synthesis of Safety Research Related to Speed and Speed Management

Lawmakers across all states have put driving laws in place to help avoid these dangerous situations and minimize traffic congestion. Whether you’re towing a trailer or not, every state has some degree of regulation that doesn’t allow vehicles moving below the speed limit or below the speed of traffic to use the left-hand lane. In many states, automobiles are only allowed to use the left lane while passing. Others require drivers to move to the right when slowing down traffic.

When pulling a trailer behind your truck, you should be going slower than most other cars on the road. That means, regardless of the law, the left lane should be reserved to pass others and move back to the right-hand lane as soon as possible.

While it’s best practice for trailer towers to stay in the right lane unless passing, turning, or avoiding hazards, some states have specific laws regarding lane usage. Keep in mind that rules may change. Anytime you’re entering a new state, you should look up the particular laws for towable RVs to ensure you don’t get ticketed or, worse, cause an accident.

While many states have left lane laws for all vehicles, we gathered some left-hand lane RV towing laws for states with tighter trailer regulations.

In Connecticut, designated highways prohibit travel trailers in the far left lane on highways with more than two lanes going in the same direction.

Michigan law states that travel trailers must use only the two lanes farthest to the right on freeways with three or more lanes, except to turn left or avoid a hazard.

Any campers or vehicles with a trailer in Oregon must drive in the right lane on highways with two or more lanes. Exceptions are to overtake, turn left, respond to emergency conditions, or avoid hazards.

In Pennsylvania, vehicle combinations that weigh over 10,000 pounds may not use the left lane on limited-access highways that have three or more lanes unless they are turning left.

A person may not tow a trailer of any size in the left-most or HOV lane if there are three or more lanes going the same direction except when turning or avoiding a hazard.

No vehicle towing a trailer, or vehicle combinations that weigh over 10,000 pounds are allowed to drive in the left lane when there are three or more lanes going the same direction except when turning left, exiting, making a legally permitted left turn, or in an emergency. They also can’t operate in the left lane of a two-lane highway except when passing, turning, or avoiding a hazard. However, the HOV lane is not considered the left lane, and therefore recreational vehicles with the number of occupants specified on signs are permitted.

Remember that laws are subject to change, and some states may have related regulations that aren’t listed here.

Other Laws For Towing You Should Be Aware Of

It’s not just where you can pull your camper that state governments sometimes regulate. There can be many other state laws that you should be aware of when road tripping across multiple states. For example, most states have a maximum speed limit between 55 and 65 miles per hour for vehicles with trailers. Since this can sometimes be slower than the rest of the traffic, it’s essential for you to stay in the right lane.

There are often laws limiting trailers’ maximum width, length, or height. Sometimes even smaller details of travel trailer life can be regulated by the states:

Bottom Line For RV Towing in the Left Lane

When you’re out in your RV taking a trip across the country, the goal is to have a good time. To help make sure to avoid any dangerous or stressful situations, it’s always better to be safe than sorry.

Make sure to study local laws when traveling somewhere new. But whether there are laws in place or not, it’s best to avoid driving your RV in the left-hand lane. Also, follow towing speed limits and lane usage rules to keep your fun trip on track.

Jennifer lives with her husband in a 29′ trailer in Mexico. She is one half of DashboardDrifters.com and the founder of RVSpotDrop, a web service for full-time RVers. Jennifer Jennings has been RVing for 2+ years and writing about the RV and Van Life for 2+ years. Jennifer specializes in topics such as Lifestyle, van life, campgrounds features, destination features, and product lists. 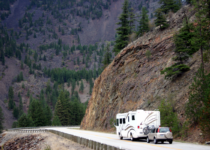 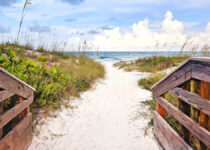 22 thoughts on “RV Towing Laws: Is it Legal to Tow an RV in the Left-Hand Lane?” 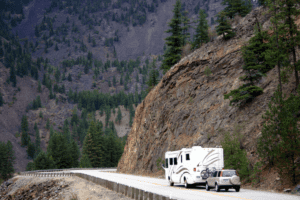